An issue is:
A Complaint, Dispute, Appeal or other activity where a person or organisation wishes to have a situation redressed, which is not covered by other organisational processes. It includes a trigger event causing re-assessment of the Certification status of a client (i.e. potential withdrawal of Certification)

An issue may also be where a client has breached legislative and or regulatory obligations / been convicted of an offence e.g. Hazardous release to atmosphere; Notifiable dangerous occurrence or similar

Records must be maintained for all Issues raised

In the case of loss of Certification (for example) the presence or absence of Certification could be a survival situation for the organisation concerned. The needs of all parties must be addressed by the Issue Resolution process

2.1 Issue is communicated to the Sustainable Certification (from internal or external sources) Issue MAY be recorded

Issues may be communicated by telephone (initially) however they will not be acted upon, unless lodged in writing and signed personally by the person raising the issue (an email is deemed to be signed personally for the scope of this procedure). Sustainable Certification reserves the right to charge a fee up to $2000 to register a complaint from an external source. This procedure can be implemented if the scope of Certification of the CB, or the ANZSIC Codes are not currently recorded against the CB.

Personnel including those acting in a Managerial capacity must not be involved in Issue investigation, appeal, complaint or dispute if they have been involved in activities of any party involved in the dispute in question, within the last 2 years (JAS-ANZ guidance 2.4.1, Procedure 10 etc).

In the case of potential conflict of interest regarding Issue Resolution or perception thereof (e.g. if the complaint relates to actions or decisions of the Certification Manager) then the Certification manager shall delegate his / her responsibility to an appropriate independent person or group, internal or external to SCPL.

Agree with and document for complainant, a reasonable timeframe for closeout of the issue

Advise complainee that a complaint has been received

The issue raised must be able to be verified. Verification may be by witnessing behaviour or speech, or by collection of supporting data/information

2.5 Issue verified as being based in truth?

2.6 Advise Complainant and invite them to re-state their case

verify the adequacy of the response received by complained.

2.9 Re-invite complainee to respond within 7 days or action may be taken to resolve the Issue

2.11 Assess Corrective and Preventive Action proposed by complainee by applying Root Cause Analysis

Corrective and Preventive Action must be effective

2.14 Take sanction actions against Complainee and advise Complainant that matter is now closed

Reason for decision to be documented to Complainee and Appellant stating reasons for the decision, iaw JAS-ANZ procedures / guidelines

The certification body shall determine, together with the client and the complainant, whether and, if so to what extent, the subject of the complaint and its resolution shall be made public.

2.15 Is Complainant satisfied with outcome?

Monitoring the effectiveness of the Corrective Action and Preventative Action response.

2.22 Advise Complainant that appropriate C & P A has been implemented 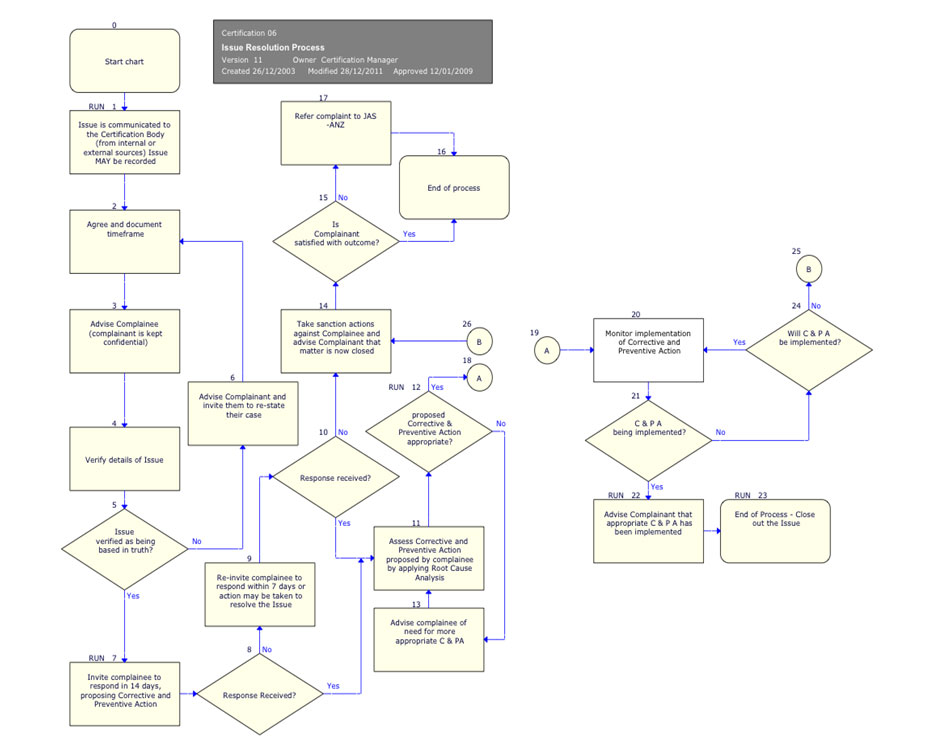